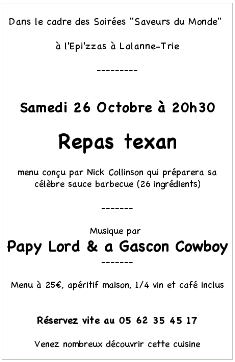 The second of our Special Around The World Cuisine theme evenings

- Southern cocktail with nachos and salsa 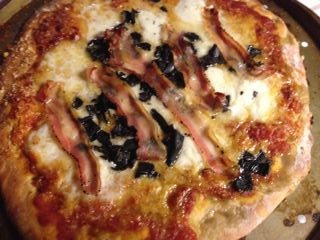 It's that time of year when we have mushrooms in abundance. The "cepe" mushrooms are the most sought after and people can actually be seen fighting in the woods to defend their "patch".

A few years ago someone set up a mushroom canning business in a camper van parked in the woods herby. They were actually sterilizing and preserving the ceps in cans and jars on site and then selling them for a fortune in the city. A pitch battle broke out between these "intruders" and a gang of locals and the police had to intervene. Sadly no-one had really broken any laws, so they all got off with the most expensive illegal parking fine the police could conjure up.

As I have said here in the past, we love the black trompette mushrooms. I made a pizza with them. 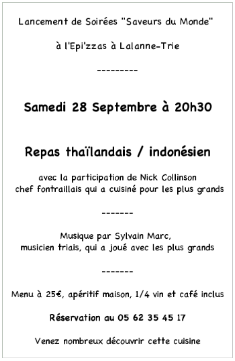 - Sweet and Sour Soup with shrimp, lemon grass and coriander 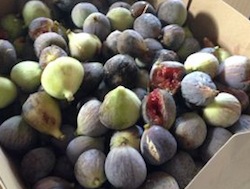 It's that time of year again.
Our fig tree is very strange. It has its first fruit in June but the figs are tasteless and floury. Then the second crop in September are simply delicious.

We make jam, I cook them with duck, we stew them in the oven in red wine and spices (peppercorns, star aniseed, cloves and cinnamon), for more ideas see this post from last year.
One new aperitif recipe we tried this year:
- partially slice the figs into quarters to open them up just a little
- fill with blue cheese
- wrap a thin slice of parma ham around the fig (this helps to keep the cheese inside)
- warm in the oven until the cheese starts to melt 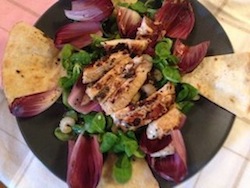 All credit has to go to Jamie Oliver for this recipe. It's not so much Jamies recipes in themselves, but the methods he sometimes uses are inventive and time-saving.
In this easy recipe, you toss a chicken breast in spices and fry it until it's dark and crispy on the outside and soft in the centre. For the spice mixture and coating I used ground coriander, chilli powder, turmeric and polenta (for added crispiness). Before frying, toss the chicken in this mixture, cover with greaseproof paper or aluminum foil and bash flat with a rolling pin so that the spices and polenta penetrate the chicken.

Once cooked, slice the chicken breast and serve on a bed of salad. I use mâche (corn leaf salad, Valerianella locust), Italian red chicory (Trevise), and celery. Served with a wrap or tortilla.
There are endless variations of this method, use your imagination. 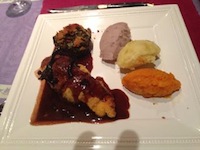 I have already posted my signature dish of chicken rolls stuffed with black Horn of Plenty mushrooms. You can find the recipe here.
These little black mushrooms are plentiful in our part of the world in the Autumn and they dry out very easily and can be kept all year. In French we call them "Trompettes de la Mort" which literally translates as "deathly trumpets"
I usually serve these chicken rolls with a blueberry and Madeira sauce.
In this photo I have accompanied the chicken with:
- a stuffed garlic mushroom: fry some chopped bacon and the mushroom stalks, mix with some garlic and parsley, stuff your mushrooms and top with breadcrumbs, bake in a hot oven until browned on top
- mashed vegetables: the purple colored mash is from our homegrown black potatoes, also shown is yellow turnip mash and carrot/cumin mash.


I am surprised I haven't already posted this recipe here as I make it quite often. The peppers that come from Navarre in Spain, just over the Pyrenees from us, are the best for this dish? Called "Pimiento del piquillo" or Piquillo pepper, they are sometimes quite hot and spicy. You can probably find them ready-peeled in jars or tins available in shops that sell Spanish produce. 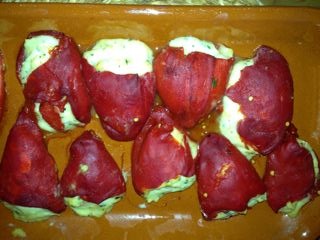 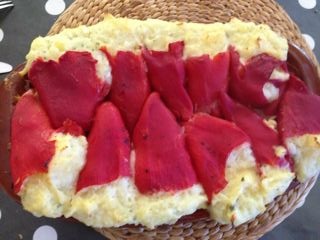 - Soak some salted codfish in water overnight or longer, change the water a few times so that the salt is eliminated.
- Make some potatoes in a lot of unsalted water (the salty codfish provides enough saltiness)
- Halfway through cooking the potatoes, add the rinsed cod to the pan (make sure there are no bones in the fish beforehand)
- Gently boil for another 10 minutes, drain.
- Mash the potatoes and fish, add some olive oil (quite a lot), a crushed garlic clove and some chopped parsley
- Stuff the peppers with the potato, codfish mixture (this is a bit messy I'm afraid)
- Cook in a hot oven for 15 minutes 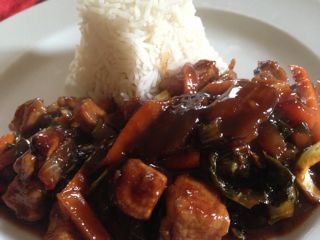 This is a classic Chinese dish. When I was a boy, my mother used to make this with crispy fried noodles on top. In this version I use pork but you can also make it with chicken breast (recipe somewhere else on this site).

- Fry some chopped onions in a wok.
- Toss small pieces of chicken breast in cornflour and add to the wok. Add some chopped carrots and green pepper. Fry until the chicken starts to colour.
- Add
&nbsp- pineapple chunks
&nbsp- pineapple juice
&nbsp- soy sauce
&nbsp- tomato purée
&nbsp- vinegar
&nbsp- a little sherry
&nbsp- honey (or sugar)
- Reduce the heat and simmer until the vegetables are cooked through and the sauce thickens
- Service with rice or noodles. 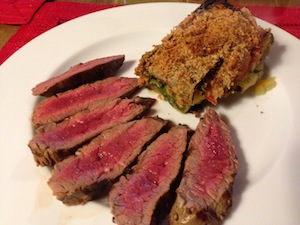 Further to my previous post, the Garonne burst it's banks and Bossòst is flooded. Incredible photos and images on the news, 400 people or more evacuated and some dead. If we had gone through there one day later, we would have been underwater.

The "merlan" is a long piece of tender beef from the top of the rump. It is called "merlan" because it looks like the fish of the same name (in French). 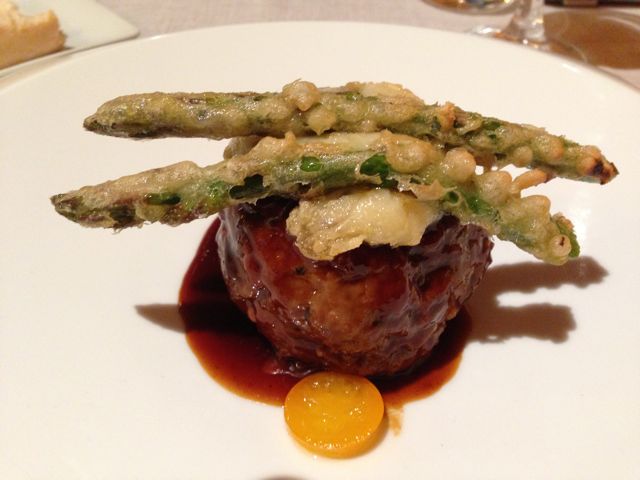 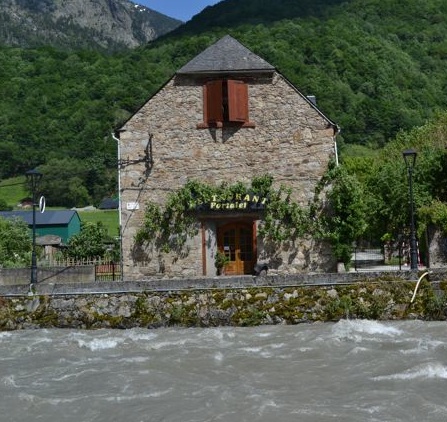 At last a photo of the best restaurant in the world, le Portalet in Bossòst, Catalunya.

Sadly the restaurant was closed for a short but well deserved break before the summer rush.
The weather has been fantastic and it has been so hot that the mountain glaciers are melting quickly and the rivers are almost flooding.
More torrential rain is coming, so the situation will surely worsen later this week.
The photo is a Catalan meatball with asparagus tempura. Mixed meat meatballs are a Catalan speciality - (see here).