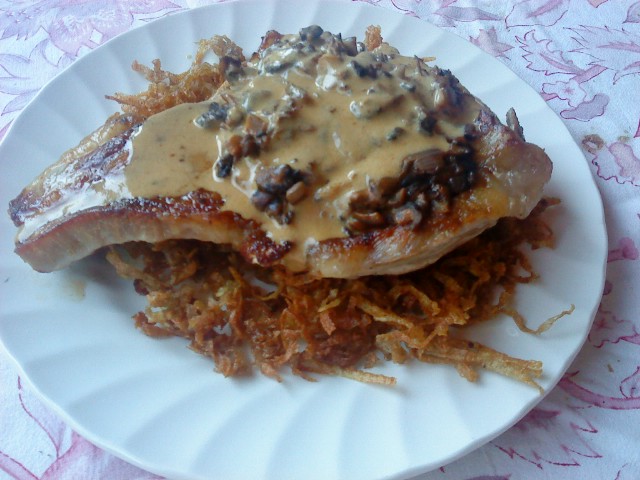 This is a variation on the famous Gundel Hungarian dish. Gundel was the cook at the Gellert Hotel in Budapest where I have stayed so many times and his recipe books are still considered, today, as the very foundation of Magyar cuisine. Gundels recipe is very similar except he adds smoked ham and cheese on top of the cutlets and grills them before serving. My version is a little lighter.
- fry an onion and some chopped mushrooms until all the liquid has evaporated.
- turn off the heat and add a little lemon juice, worcester sauce, paprika, salt and a beaten egg, stir continuously until the "mushroom paste" thickens
- finely shred some peeled potatoes and dry them as much as possible with paper towels so as to extract as much moisture as possible
- fry the veal cutlets in a little butter and oil for five minutes on one side, a little longer if they are very thick, turn them over
- spoon the "paprika/mushroom paste" on top of each veal cutlets, lower the heat, add some veal stock, a little white wine and cover for 5 minutes
- deep fry the dried, grated potatoes for a few minutes to make "angel hair", drain off the fat (place on kitchen roll), add salt and pepper
- place the cooked veal cutlets on top of a bed of the angel hair potatoes and put the juice of half a lemon and fresh cream into the pan to make the sauce, pour over the cutlets.